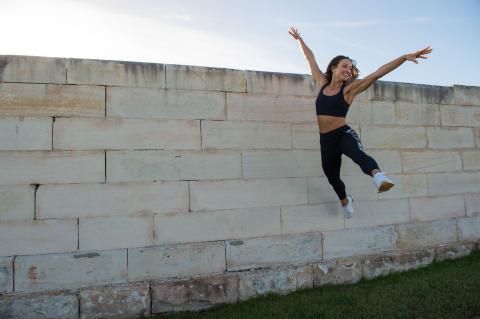 Libby Babet, co-founder of Nurture Her and trainer on The Biggest Loser Australia believes she was put on this Earth to help people be happy and healthy.

In this article, Libby breaks down 3 simple mindset-hacks she uses to keep her nutrition on track as a busy mum and businesswoman.

My number one trick is focus on 10%. What the hell do I mean by that? Well, every time you look at a meal or a snack or a choice that you are making, just look at how you can shift it 10%. To be 10% healthier or 10% better and more nurturing for you.

For example, I recently had a client who said to me they love two slices of tip top white bread with baked beans on top for breakfast. They don't want to change it. It doesn't matter what healthy things I tell them to do, they're not going to do it because they just want that for breakfast.

Okay, fair enough. I'm not going to take your nurturing things away from you, especially if you're a busy mum. However, I did question her as to how she could make that 10% healthier and we brainstormed it.

But when heating up the baked beans, I challenged her to add a couple of different types of veggies. So instead of just plain baked beans, add some spinach, add some asparagus, add some mushrooms or some broccoli, whatever it might be.

Now, instead of white, no nourishment bread with sweet baked beans (which do have lots of fibre and some protein), we've got grainy bread that's got lots of fibre and we've also got extra fibre from the veggies and extra nutrients and suddenly this becomes a meal that is worth putting in your body that's going to pick your health up a little bit.

If you're just adding that to breakfast every day, you're going to have two serves of extra veggies per day every day of the week, and all of a sudden that adds up. We’re supposed to have around five serves of veggies, which is about a half cup of cooked veggies per day. Suddenly there's one to two cups of that at breakfast.

This tip is from my mate and business partner at Nurture Group, AFL legend Paul Roos. He said, don't forget that you're not just a person or a leader. You're actually a role model for someone in your life, whether it's your kids, your friends, your family, your team, your business.

So, if you choose to show up to work without having exercised, having eaten a crap breakfast, feeling blah, feeling tired, scoffing down coffees just to keep up… what kind of a role model do you think that is?

What if you’ve got up, done a bit of a workout or at least gone for a walk. Maybe you’ve done a meditation or whatever it is you’re capable of doing that morning. You’ve added a few veggies to your breakfast. You’ve walked in energised and pumped and ready for the day. That is a role model.

This one is from Layne Beachley who came to our Nurture Her event last year. Layne is the only woman in history to win seven World Championships in surfing. And the only surfer, male or female, to win six consecutive world titles.

When someone who has achieved as much as she has, so consistently at such a high level, you know you need to listen to what they say and Layne said something to me that really hit home last year.

I've been putting this into my daily life for six months and I've seen everything improved since I've been doing it from my business to my health.

She said be very careful about the words that you put after “I am” because whatever you put after those words is what you’re owning.

So, if you get up in the morning and the first thing you think is “I'm tired” or “I'm too busy to eat well” or “I'm just unhealthy”, you’re owning those words and that’s how you’ll be.

For example, I was getting up in the morning because I have a young daughter that doesn't really sleep and I was looking at myself in the mirror and saying, “I am tired”. What do you think that does to my whole energy?

The “because” is also really important because it makes you think about why you are energised or whatever it might be. So, I'm energised to lead these sessions today because I love what I do. I love my job. I'm passionate about it. I love the girls. I want them to have a great experience.

As soon as you flip that mindset, you get pumped to get up and do what you need to do.

This article originally appeared on libbybabet.com